On Monday 15 October 2018, the Registrar of the Road Traffic Infringement Agency, Japh Chuwe stated on the SABC 1 consumer affairs programme, “Yilungelo Lakho / It’s Your Right” that the out of the nine provinces in South Africa, the Western Cape was opposing, Mpumalanga was abstaining, and all of the other provinces are voting in favour of the AARTO Amendment Bill.

This announcement came as somewhat of a surprise to Howard Dembovsky since, apart from the Western Cape publicly announcing that it would oppose the Bill, no announcement had been made by the National Council of Provinces. When questioned further by Dembovsky (off air), Chuwe said that the National Council of Provinces was expected to hold a vote on the Bill in January 2019 and what he had announced was an “indication” that had been given to him.

Japh Chuwe is now referred to as being the “CEO of the RTIA” by the Road Traffic Infringement Agency. The AARTO Act creates and refers to the Registrar, not the CEO but why would that matter when trying to assert how important a person is? 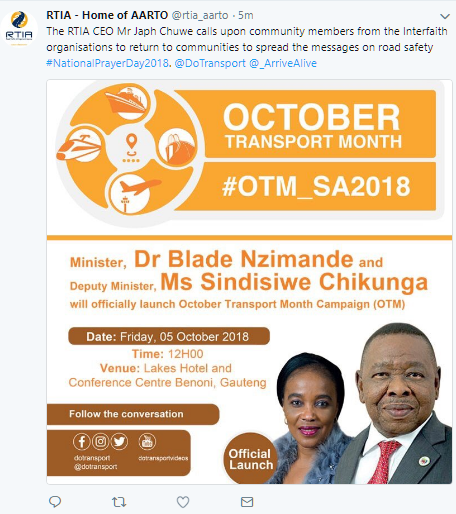